Click here to see a video about McLuhan (I sadly struggled to embed it in the blog post).

Read more on how Marshall McLuhan predicted the internet, here.

Marshall McLuhan was, and still is, a very popular media theorist. In the 60s and 70s he was practically a celebrity.

He said that different media invite different levels of participation on behalf of the audience.

So… media sit across a spectrum of hot to cool.

Hot media is that which engages one sense completely. It demands little interaction from the user because it ‘spoon-feeds’ the content. Typically the content of hot media is restricted to what the source offers at that specific time. Examples of hot media include radio and film because they engage one sense of the user to an extent that although the user’s attention is focused on the content, their participation is minimal.

Cool media generally uses low-definition media that engages several senses less completely in that it demands a great deal of interaction on the part of the audience. Audiences then participate more because they are required to perceive the gaps in the content themselves. The user must be familiar with genre conventions in order to fully understand the medium. Examples: TV, phone conversations, comic books.

Marshall McLuhan predicted the global village, one world interconnected by an electronic nervous system, making it part of our popular culture before it actually happened.

Marshall McLuhan was the first person to popularize the concept of a global village and to consider its social effects. His insights were revolutionary at the time, and fundamentally changed how everyone has thought about media, technology, and communications ever since. McLuhan chose the insightful phrase “global village” to highlight his observation that an electronic nervous system (the media) was rapidly integrating the planet — events in one part of the world could be experienced from other parts in real-time, which is what human experience was like when we lived in small villages. 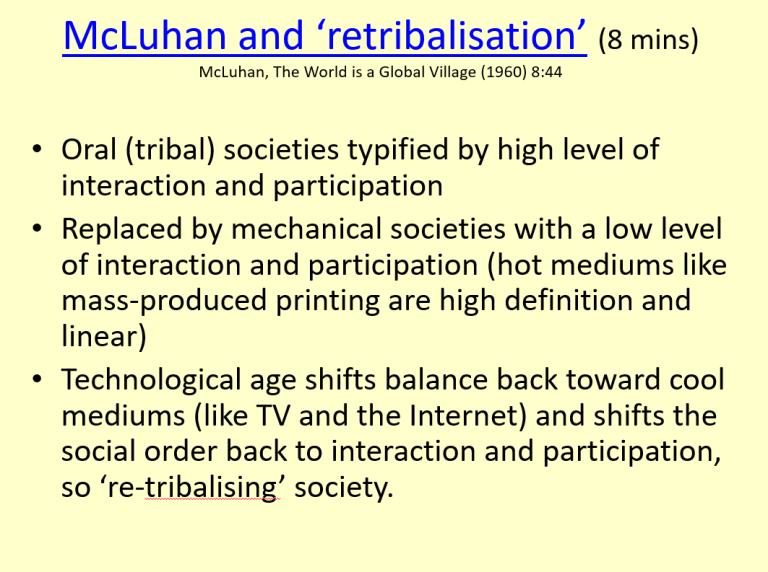 McLuhan’s second best known insight is summarized in the expression “the medium is the message”, which means that the qualities of a medium have as much effect as the information it transmits. For example, reading a description of a scene in a newspaper has a very different effect on someone than hearing about it, or seeing a picture of it, or watching a black and white video, or watching a colour video. McLuhan was particularly fascinated by the medium of television, calling it a “cool” medium, noting its soporific effect on viewers. He took great satisfaction years later when medical studies showed that TV does in fact cause people to settle into passive brain wave patterns. One wonders what McLuhan would make of the Internet, the most powerful medium we have yet invented, driving integration of the global village he foresaw?

Notes and Images from Lecture and Seminar Slides. Image of McLuhan in front of the screens: http://afflictor.com/2016/07/26/we-are-living-in-an-age-of-shocks-and-crises/

One thought on “Marshall McLuhan’s Hot and Cool”